Wholegrain millet is an ear 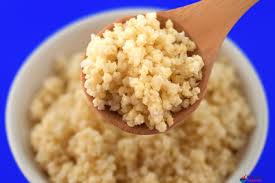 thy tasting fluffy grain when cooked.  It’s really cheap and is great for mopping up sauces/juices.  Its a far healthier choice than couscous but looks really similar when cooked.  Make sure to buy millet wholegrains instead of the flakes (which are used to make a porridge!).  Millet is naturally gluten-free and high in nutrients whereas couscous is made from white flour.

Enough to feed 3 people as an accompaniment

Variation:
After cooking, drizzle a little extra virgin olive oil on top of the millet, and sprinkle over some ground paprika.  This looks lovely in a serving bowl.   You could also sprinkle on some fresh coriander leaves.

Why this is good for you:
Millet grains are a rich source of magnesium and also of vitamin B17.  Magnesium helps clear toxins from the body and also aids relaxation, helping you stay chilled under pressure.   Its also great value.  Vitamin B17 is a powerful nutrientwith action against cancer cells.  Vitamin B17 is also found in many bitter tasting seeds such as those of apples, pears as well as bitter apricot kernals.  Millet is an alkaline grain, which helps support bone density, joint health and vitality generally.  An alkaline food is one that after the body has “burned” it for energy, leaves an alkaline residue.  Fruits, vegetables, beans, pulses, millet, buckwheat and apple cider vinegar are alkaline whereas cheese, milk, wheat, meat, fish, and eggs are acidic.  Acidic foods, when not balanced by alkaline ones, can cause skin, digestive, bone, joint, kidney and heart problems.  Eating about 80% of your diet as alkaline foods is associated with a longer healthy lifespan.

I did buy a few “dud” batches of millet grains that never seemed to cook properly or fluff up. You might have got a bad batch. If your meals are a healthy balance of protein, half the place filled with low-carb veggies, and up to 1 cup of cooked millet, then the portioning is usually OK. Hope it works better next time! Best, Anna.

I followed the millet recipe to the tee but it was still grainy after 10 minutes so I had to add a little more water and let cook some more. Alas it ended up slightly over cooked. And it was not enough even as a side dish for 3 people. Hmm…
I guess it’s up to trial and error.

We use cookies to ensure that we give you the best experience on our website. If you continue to use this site we will assume that you are happy with it.
By clicking “Accept”, you consent to the use of ALL the cookies.

But opting out of some of these cookies may have an effect on your browsing experience.
Necessary Always Enabled

Any cookies that may not be particularly necessary for the website to function and is used specifically to collect user personal data via analytics, ads, other embedded contents are termed as non-necessary cookies. It is mandatory to procure user consent prior to running these cookies on your website.